I had to bring Princess A with me when I was trying to have my glasses fixed (they made the prescription wrong).  After being at my appointment for almost two hours, I decided to take her out to lunch.  MyBlogSpark had sent me a gift card to try out the new BK Crown program so we went to Burger King.  She ordered the kids meal which has the new BK Crown program.  Of course Princess A was first interested in the toy that came with her meal.  Next she had to try on the crown.  I remember wearing a cardboard BK Crown when I was a kid two.  As we were eating our lunch, we started reading the box the kids meal comes in.  There were lots of different activities on the box which Princess A explored when we got home.  On the box is also a code.  If you input that code at BKCrown.com your child can help BK decide which charity BKC will fund, the charities choices are: the Wildlife Conservation Society, National Parks Conservation Association, DonorsChoose.org and Have It Your Way™ Foundation.  Personally we voted for DonorsChoose.org, I have donated to them in the past as they help fund classroom project. 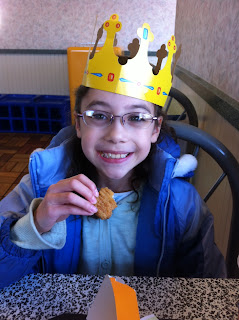 As you can see in the picture above, Princess A really enjoyed her meal.  She raved about it so much that I had to take her and her little sister back a few days later.


The BK CROWNTM/MC Program information and coupon have been provided by Burger King Corporation through MyBlogSpark.
Posted by noreen at 8:39 PM