Review: Walking with Dinosaurs at the Tacoma Dome

Last night my family and I saw the wonderful show, the Walking with Dinosaurs - The Area Spectacular at the Tacoma Dome.  All of us were mesmerized the entire show.  My youngest daughter just glowed with excitement with each new dinosaur. 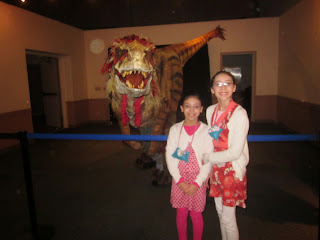 Before the show we were able to meet one of the male Utahraptors before the show.  You can tell that it is a male because of the red plumage.  As you can see my girls were very excited. 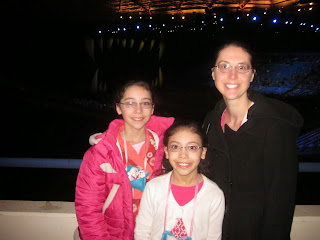 Behind us you can almost see the stage.  The stage is set down low and the teeth are were the dinosaurs enter and exit.  The show covers three main periods, Cretaceous, Jurassic, and Triassic.  You get to see the evolution of dinosaurs and how they may have interacted.  The dinosaurs are so lifelike that you feel as though you have traveled back in time, million and millions of years, to when they walked the earth.  The setting, the music and of course the dinosaurs really transport you to another time and place.
The show last approximately 96 minutes with intermission.  The show was so entertaining that  it did not feel as though a little over 90 minutes had passed.  I did notice that some of the younger kids around us were getting a little antsy during the last 5 to 10 minutes.  My favorite part was when the adults came to protect the young, the T-Rex and the Brachiosaurus.  The narrator is great too, the dinosaurs are the main attraction but he entertains you with interesting facts.
My daughters kept saying how much they loved the show the entire intermission (20 minutes) and the entire way home.  My youngest wants to stop by the library after school because, "I want to checkout books on dinosaurs so I can study them over winter break!"   The show is perfect for the whole family, we saw little ones to grandparents, and all seem to be enjoying the show.  This morning I was telling so many people how great the show is, a few told me that they are getting tickets to attend the show.  My daughters are already talking about seeing the show again the next time it is in town.
In conclusion I highly recommend Walking with Dinosaurs - the Area Spectacular for everyone: the young, and the young at heart.
I received complimentary tickets to attend the show in order to facilitate my review.
All opinions stated are my own.
Posted by noreen at 2:28 PM No comments: 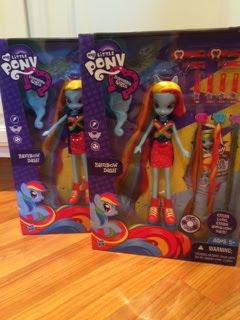 If you are a ToysRUs Rewards member the dolls are $5 today only as a door buster. They are also bogo half off so the total was $7.50 for both.
Posted by noreen at 12:11 PM No comments:

New Trailer for INSIDE OUT

Posted by noreen at 7:31 PM No comments:

Before we went nonGMO we stopped eating artificial dyes and avoided petroleum preservatives.  During our first dye-free Christmas my daughters really missed candy canes.  They missed them so much that when I found a safe candy cane you would of thought they had won the lottery.  I found the Organic TruJoy Candy Canes at my local Fred Meyer and not so local Whole Foods.  We have been buying these for a while and love them.  Even if regular candy canes became nonGMO and artificial dye free we would still buy them.  The candy cane is a lighter peppermint flavor than most candy canes but some how even more delicious.  My local Fred Meyer has them on sale 2 for $7.00 or $3.50 each.  We are currently on our second box.
Posted by noreen at 12:40 PM No comments:

WALKING WITH DINOSAURS – The Arena Spectacular

The WALKING WITH DINOSAURS – The Arena Spectacular returns to the Tacoma Dome Dec. 17-21!  We were disappointed that we missed the show last time they were here.  A classmate of my daughter's actually went for his birthday and he talked about it for weeks.  His grandmother told me recently that he still says that it was the best birthday he ever had.  My family and I are so excited that we will be attending this year.
The show is suppose to be simply spectacular:
According to the Tacoma dome site:
It’s a dazzling $20,000,000 arena spectacle of unprecedented size and quality set to captivate all ages. Marvel at the story of their 200 million year domination of life on earth. Watch them walk. Hear the roar. Be there as they fight for survival and supremacy. From the ripple of their skin to the glint in their eye, you will know the dinosaurs really are back!

Santa at the Old Cannery

This is the only Santa that we can visit as, according to the girls, he is the REAL Santa!
Posted by noreen at 12:42 PM No comments:

My kids and husband adore Grape-Nuts.  They were so sad when I stopped buying them when we went nonGMO.  Recently I was grocery store, when I noticed that Grape-Nuts now has the Non-GMO Project seal.  When I see that seal I know that the food is safe for my family.  I bought two family sizes boxes and my family finished them in just one week.  I am so happy that more companies are removing GMOs from their products and even more so when they become Non-GMO Project verified.
Posted by noreen at 11:46 AM No comments: 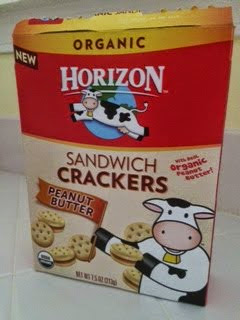 A few weeks ago I found Organic Horizon Sandwich Crackers Peanut Butter at Target and then Walmart.  My girls both love these, as do I.  They have them in their lunch a few times each week.  Horizon also has a cheese version but we have not tried them. They are not Non-GMO Project Verified but since they are organic we consider them safe.
Posted by noreen at 12:54 PM No comments: