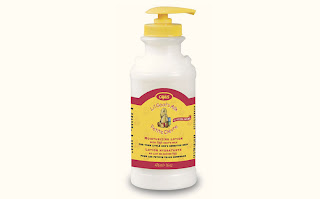 As soon as the Canus L'il Goat's Milk lotion (the product line for babies) arrived Princess G couldn't wait to try it. I barely got it open and she wanted to put some on. Princess G very carefully put lotion on any body part that was not covered with clothing (besides the face which she is not allowed to put lotion on). Princess A put some on and said that she liked it. I left the rest in their bathroom. Princess G has put it on at least once a day if not more. I always know when she has but it on because of the light scent. When I first smelled the lotion it was so familiar but I couldn't remember where I had smelled it before. Then it hit me: goat's milk. It smells faintly of goats milk which makes sense, it is made from goat's milk. Princess G's skin is softer and she just loves slathering the stuff on. Princess A has also been using the Canus L'il Goat's Milk lotion and she has been itching less I believe because her skin is not as dry.

Thank you Extraordinary Mothers for the opportunity to do this review!
Posted by noreen at 9:34 PM