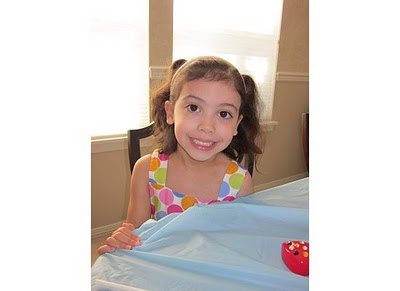 For Princess G's birthday party we had a crafty tea party. As the two guests arrived (it is so hard to find a date that works for more people in the middle of summer) the joined us in crafting in the dining room. The first craft was using sticky-back jewels to decorate a foam wand (I got at the dollar store) and small heart containers (lower right corner of picture and also from dollar store.) 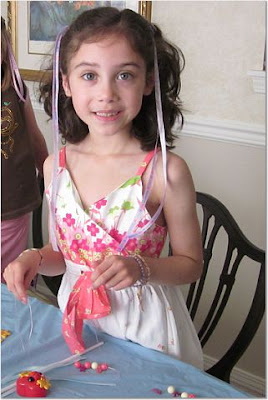 The girls also made necklaces using beads from a kit Princess A received for her birthday. She wanted her sister to use them at the her birthday party. I thought that was so sweet to share with her sister and guests like that. Lastly the girls pucked out ribbon to attach to glittery barrettes and wear for the party. 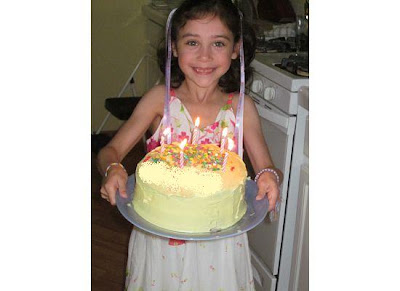 Soon it was time for the tea party. Just like at Princess A;s Birthday Tea Party we served scones, brownie hearts, real tea and other treats. The girls all thought it was so much fun to have a real tea party with loose tea, tea strainers and the best part: sugar cubes. The last few parties the girls have asked for cup cakes so I was a little surprised that they wanted a cake. After I frosted it the girls decorated it with Sprinkles and Princess A wrote out her sister's name a red frosting pen. Princess A was so proud of her decorating and that she got to carry in the cake with the candles burning and to lead the "Happy Birthday" song. 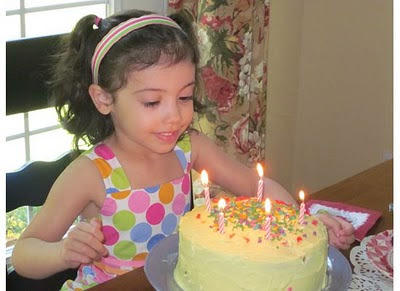 Princess G said her wish, "I want to be a fairy," and took a deep breath. 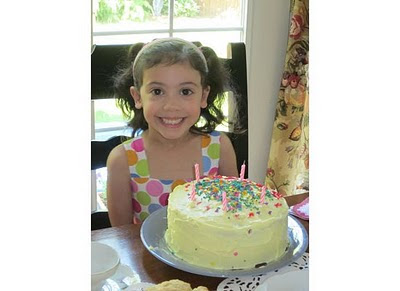 Out blew the candles in one try! 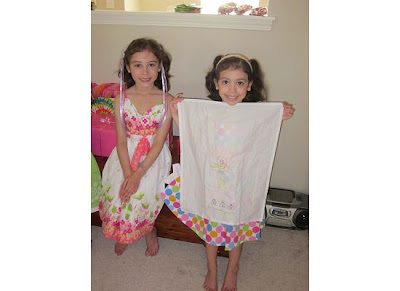 Finally, according to Princess G, it was time to open presents after they played with Legos for a little while. Her first gift was from her sister. Princess A gave her a handkerchief, really a tea towel, she embroidered herself with flowers and a hula girl and a fairy house made from pipe cleaners and flowers. Princess G also received a My Little Pony car (Pinkie Pie as a mommy with her baby in a car) and a Jesse (from Toy Story) action toy.
Princess G had a wonderful party as did all of the girls. It was nice that the party was small, only two guests, but I think it would be fun to have a few more kids next time. I think I will have the birthday party the last weekend before or after school gets out next June. Hopefully more people will be around to come to the party.
Do your kids have birthdays in the summer? when do you have their birthday parties?
Posted by noreen at 10:07 PM