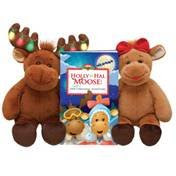 Yesterday the cutest package came via FedEx. As soon as I opened it up the princesses were so excited. It was Hal Moose™ and a storybook "Holly and Hal Moose: Our Uplifting Christmas Adventure". When you press the moose's hand the Christmas lights on his antlers light-up and blink. After turning him on a few times they took him to the bathroom to see how bright the lights are in the dark (we don't have window in the half bath). Apparently Hal Moose™ passed the test and the princesses finally noticed the book. They immediately wanted to hear the story. We curled up on the couch to read the story. As it was dinnertime and I had food cooking (and starting to burn) I could not finish the story right away, what I did read was so cute. The princesses each have one friend from from Build-A-Bear Workshop® that they got to make for Princess G's first birthday. When ever we are in the nearest mall that has a from Build-A-Bear Workshop® we always stop in and sometimes pick up a little something for their friends. Hal Moose™ is just $12 but now you can buy Holly and Hal Moose™ together for only $24 and get their storybook for free ($15.99 value, while quantities last). If we were not snowed in today we would be taking a trip to the Build-A-Bear Workshop® to make Holly the Moose so they can each have a moose (to prevent future arguments over who gets to play with it.) If you are not snowed in I suggest heading down to a Build-A-Bear Workshop® for a very cute gift or if you are snowed in you could order it from their website.
Posted by noreen at 5:01 AM