Our St Patrick's Day and the Ticky Leprechuan 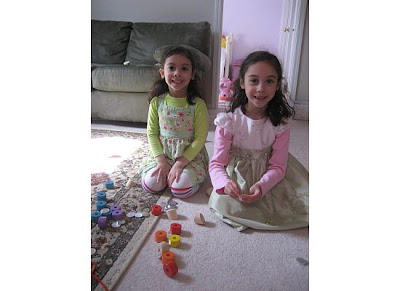 Last year a tricky leprechaun made some messes in our house and the girls tried to trap him. My mom told the girls that if they asked the leprechaun to stay he would so we have been try to catch him all year. We have heard his 'Hee Hee!" and his footsteps every once in a while. Today he made a big mess (he knocked over some blocks) and dropped some chocolate coins. 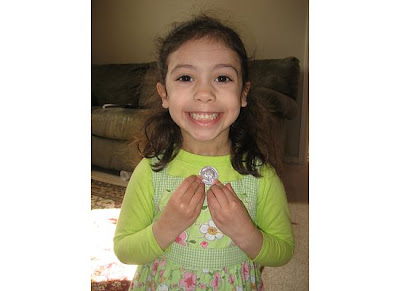 The girls found most on them on the landing but he also left a few in each of their rooms and the playroom. 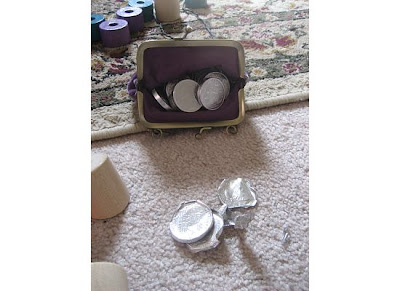 The girls decided to put them all in one purse and of course they had to taste a few. 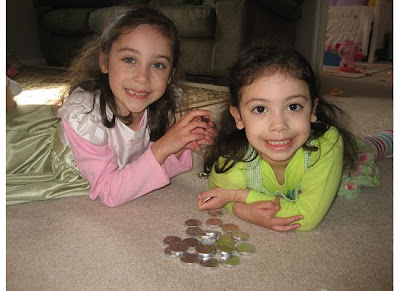 Princess G really just wants to eat them all at once but Princess A said they need to keep a few for the leprechaun trap. Princess G then really wanted her big sister to make a leprechaun trap as soon as possible, but with some nice weather we went to the park instead. Princess G was really worried that we did not catch the leprechaun on St Patrick's Day. Princess A reminded her (according to Nana) that if you ask your leprechaun (they visit those of Irish decent on this special day) they have to stay for a whole year. I think that Princess G and I will be making some traps tomorrow while her sister is at school. Just like last year I read the girls Clever Tom and the Leprechaun right before bed but this year they got to enjoy green ice cream (mint chip) too!
Did you catch any leprechauns today?