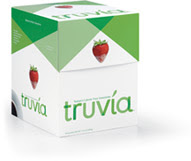 I was sent a box of Truiva to try and review. It is a natural sweetener made from rebiana which is part of the leaf from the stevia plant. The strevia plant has been used to sweeten food and drink in parts of northeastern Paraguay for over 200 years. Truvia only uses rebiana which is one part of the leaf. I first tried the Truvia by itself, Truvia was just a little sweeter than sugar. I am not much for no calorie sweeteners but my husband's cousin, Aunt Cathy, uses them all of the time. When she was visiting we tried some Truvia in some hot tea. Aunt Cathy really liked it, she liked it so much she took most of the Truvia home with her. She has been using it in her coffee in the morning and tea in the evening. I really like that Truvia is made from natural materials instead of man-made chemicals. Most of my family is trying to gain weight so we don't need a zero-calorie sweetener but I will be keeping Truvia on hand for visitors who want a little sweetness in their coffee or tea without adding calories. For those of you who are interested in zero-calorie sweeteners Truvia is great.

Thank you Mom Central for the opportunity to review Truvia.
Posted by noreen at 10:25 AM