Princess A Lost her 7th Tooth! 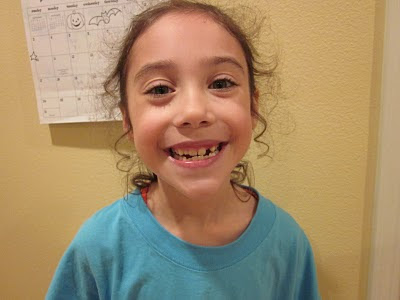 Princess A's loose tooth has been bothering her for a while but I was not expecting it to fall out so quickly. Yesterday morning she cried in pain while trying to eat her English muffin. I ended up cutting it into very thin slices. Right before dinner she asked me to pull her tooth out. I did not think it was ready to come out but I gently twisted the tooth very slightly and out it came. It did bleed for a few seconds but soon she was good. She was so excited and could not wait for the tooth fairy. She also let me know that one of her friends received a Webkinz from the tooth fairy. She decided to write a very nice note asking the Tooth Fairy if she could leave something more than just money for the tooth. The Tooth Fairy was a little worried about how she was going to pull that off when I remembered that I had a Tamgotchi in my stash. I had bought it last year but at the time I thought she was too young and that I would be the one taking care of the Tamagotchi. Daddy Tooth Fairy typed up a note stating that the Tooth Fairy would grant her wish (and a few coins too) this time. The Tooth Fairy also mentioned Princess G and how it will be her turn soon. Princess A was just so excited to wake up this morning and have a Tamagotchi. She knew about them from her cousin who had one on her last visit two years ago. The Tooth Fairy scored a home run with this visit!
Posted by noreen at 10:52 PM