My husband need to make a trip to Home Depot and of course his girlies wanted to go to. When we got their I saw that they were having a Kid's Workshop. I heard of this before but never remembered on the day they had one. The girls each got an apron and got to pick a project, most were football stuff, but they had two trays left. The girls each got a hammer, some glue and we got started. 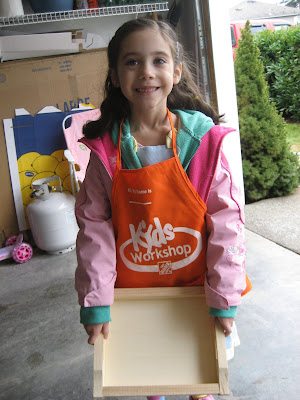 Princess A hammered every single nail (after I got them started, I do like my fingers unsmashed) and did all the gluing for her tray! 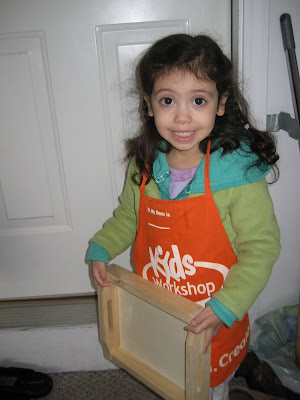 Princess G hammered the first four and then decided that the extra nails were on some kind of adventure and started to play with them. Princess A ended up doing the gluing and some hammering. The timing was perfect as we finished just as Daddy had loaded up the car with his purchases. The girls had so much fun they want to go again next month.
Posted by noreen at 11:13 PM