Valentine's for School and Crayon Craft 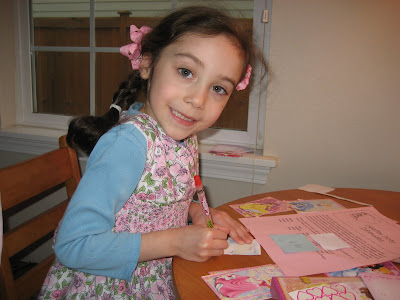 Princess A is writing out her Valentine's for for each classmate (she picked Disney Princesses with a few Tinkerbells for the boys). She wanted a little something to add to the valentines so we made some crayon hearts. 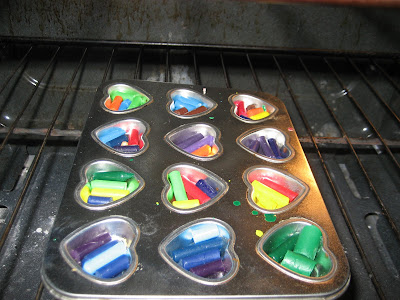 I have been collecting broken crayons for a while and after peeling off the paper Princess A arranged them in this heart pan. I cooked them at 250 degrees Fahrenheit for 8 to 10 minutes until they were fully melted. 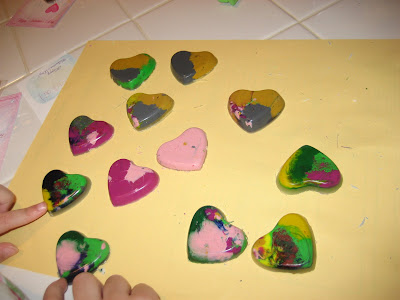 Once they were cooled (I put them in the freezer to speed up the process since we did two batches) I popped them out. 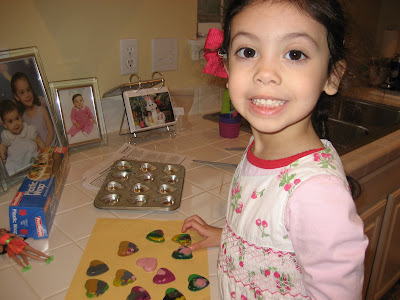 Princess G got to pick her favorite one to keep. She then ran up stairs to put it in her treasure box. I then started imagining crayon marks all over the house and I made the girls promise to keep their hearts in a sandwich bag at all times. 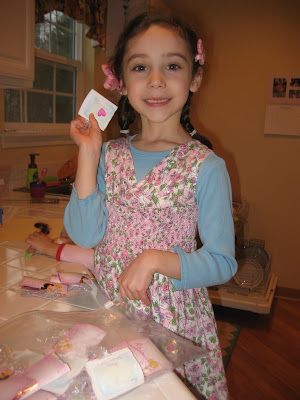 I wrapped each heart in plastic wrap by gathering the plastic wrap at the top as if I was going to tie a bow around it (though I did not). I then tucked the heart inside the folded Valentines and stapled it closed in such a way that the heart is attached to the top of the Valentine (when it is later opened.) Of course Princess made a Valentine for herself, she remembered that she made one for herself last year for Pre-K and now believes that since she has to have a Valentine for everyone in her class that includes herself.
I hope the kids like them and that no one thinks it is candy, I think I will warn the teacher tomorrow just in case.
Posted by noreen at 7:13 AM