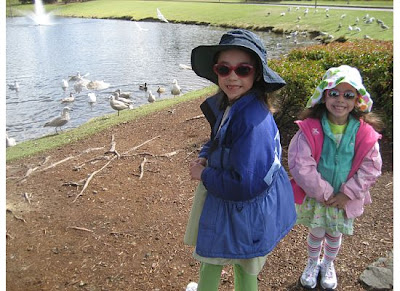 Near the entrance to our neighborhood there is a small pond with ducks (and sometime geese and seagulls.) We drive by here every time we leave our house and we kept meaning to stop and feed the ducks. Four and a half years later I finally did! For Princess A's party I made way to many scones and we just could not eat them all. I saw them sitting on the counter and as I was leaving to pick Princess A up from school I just grabbed them. The girls were so excited when I stopped at the pond. 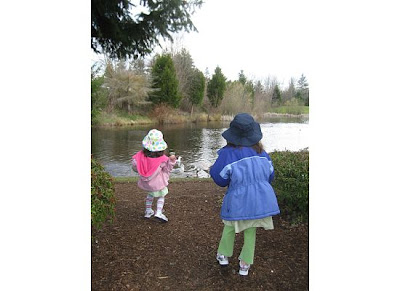 Princess A and Princess G just had a blast throwing the scones and bread scraps to the birds. We tried to give most of the food to the ducks but the geese and seagulls were much more aggressive. 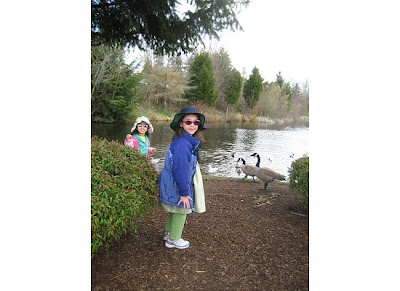 The longer we stayed the braver and braver the geese became which meant they got closer and closer. The girls were a little nervous but thought it was funny to throw the scraps at my feet, the geese were eating the food off of my shoes! 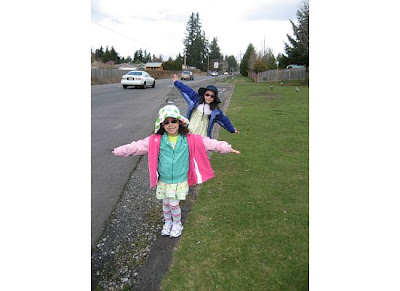 When we finally finished our supply we headed back to the car. The geese started following us and honking, at first they walked slowly but as we got further away the sped up and hinked louder. As I was strapping the girls in the car we found one last scone. I threw as far as I could at two geese kind of close to the car. The geese were too slow and the sea gulls got it.
The girls can not stop talking about taking Daddy to go and feed the ducks so we will just have to go back soon. (I have been freezing the bread scraps as they get stale so we will have some when we finally go.)
Posted by noreen at 11:22 PM