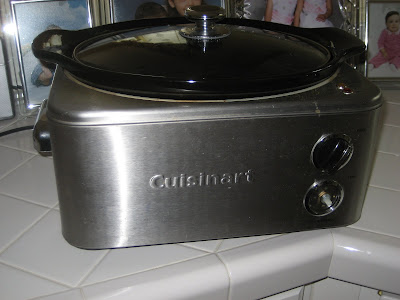 I woke up early this morning to start a family favorite, Beef Curry, in my slow cooker.
The house smelled so good as I browned the meat before I started it in the slower cooker. When I got home from picking up Princess G from school it was off. At first I thought it might be the outlet so I moved it to one with the phone so I know the outlet is working. It still did not work. 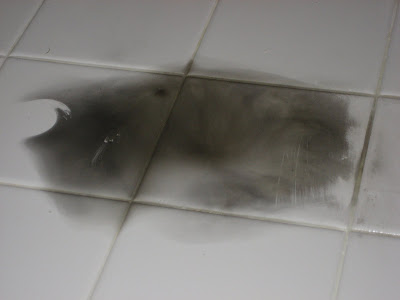 The best part (sarcasm) is when I turned back I saw this on my counter top. Not only did it stop working it also scorched my tile! To say I was not pleased is and understatement. I decided to call Cuisinart and see if anything can be done. The machine has a three year warranty but only if I can find the receipt. As it was a gift from my husband and he never saves receipts I am not hopeful. I do know that he bought it from Macy's, so the nice lady on the phone said that if I can find a bank statement (if debt was used) or a credit card statement with right amount they will take that. I still don't know if we can find it. The part that is annoying is that according to the serial number it is from 2007, therefore the only way I have had the slow cooker more than three years is if I received the machine as a gift in January, February, March or April and the only gift giving would be for Valentine's (which I did not, we only exchange modest gifts and this cost about $100.) My birthday is in October and our anniversary and Christmas are in December. I know the machine is less than three years but I might not be able to prove it!!

Also even if I can prove it I have to pay to ship the machine back to Cusinart.