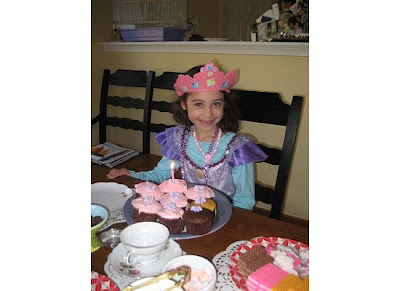 Princess A wanted a real tea party for her birthday. To her that meant fancy teacups, loose tea, over the cup tea strainers, scones, brownie hearts, lots of other treats and sugar cubes (served with sugar tongs). I scoured thrift shops for fancy tea cups, got some teapots via Freecycle and ordered the tea strainer and sugar tongs online. When the guests first arrived everyone made candy necklaces (a Valentine kit I found at JoAnn's in January). After the necklaces everyone decorated a glittery crown just like the one Princess A is wearing (I forgot to get jewel stickers so we used regular stickers.) Once everyone finished the crafts we sang 'Happy Birthday' and had the tea party. I served two kinds of tea, peppermint and fairy tale tea. Each princess tried the tea though not all of them liked tea (I had apple juice for them.) I did get a few who had never had any tea that was not ice tea and they really liked it. After much giggling, talking and eating the girls were done. 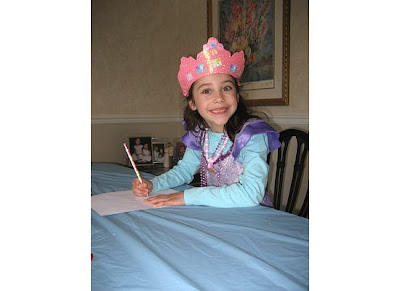 Princess A wanted to teach everyone how to draw Micky Mouse and Minnie Mouse. When we were at Disneyland we attended the Animation Academy for the first time and in two different sessions learned how to draw the characters. Princess A repeated the lesson almost verbatim. 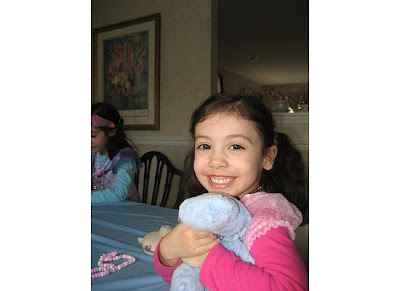 Princess G and Hippo did not want to draw so they just watched. 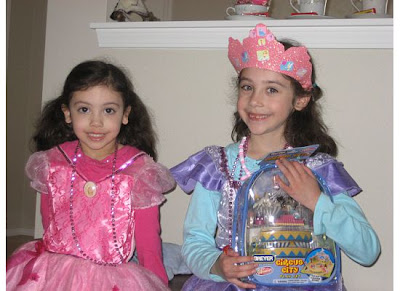 After the drawing lesson they opened gifts. Princess G gave her sister a Breyer Circus City set. Unfortunately one of the horse's legs broke within the first 20 minutes (I let her open it after all the guest had left). I tried to glue it back together but it just didn't work. She was very sad her horse broke and I was very disappointed it broke so fast. From her friends she received a pink Zhu Zhu pet (she was so excited to get a pink one), a check and art supplies! 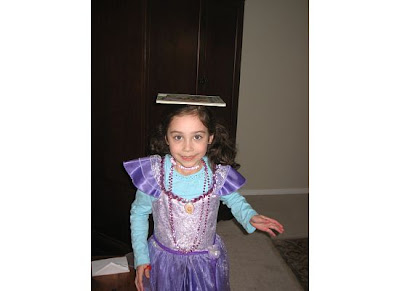 We still had a few minutes left so the girls played poison apple (just like hot potato but is a poison apple from Snow White and if you have it when the music stops you take a bite and fall asleep). After that they practised walk like a princess with a book on their head. Princess A was really good, and was able to walk for a long time with that book. The party was lots of fun and the girls can't wait for another tea party with some of the friends who could not attend.
Posted by noreen at 10:48 PM