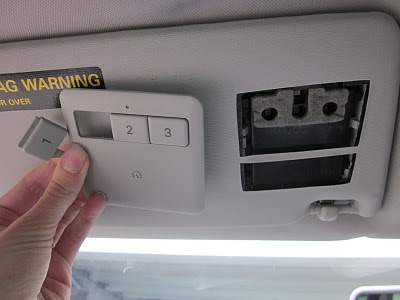 Yesterday I was taking the girls to school when part of my car broke off!! I have a built in garage door opener in the visor of my car. Which is a good thing because our two car garage only came with one opener. I went to press the button and the button broke off and the whole cover fell too! I did not want to be late so I figured out how to shut our garage and we were off to school. When I got home I called Volkswagen and asked about replacing the plastic cover thing. Guess how much? Come on guess? No, higher. $600!! Yes, $600 dollars and that does not include labor. Want to know why? I would have to replace the whole visor. They do not sell that plastic cover, only the visor. $600, I don't think so. I was just going to superglue it. Before I did that I thought I would see if anyone else sold that part. Well no one sold that part but lots of people were trying to buy it, that part must break often. A few people suggested wrecking yards so I started calling some in my area. During the phone calls I found a forum for Passat owners and someone suggested contacting Homelink, the company that makes the built in garage door openers. They don't have a number so I sent them an email. I started to get antsy when the thread in the forum (which was from 2006) mentioned that people who called usually got the part and some who emailed did not. I called the parent company in Wisconsin and they gave me the number to Homelink in Michigan. After a 15 minute phone call full of questions they are sending me the part for free! I saved $600 in 90 minutes!! Can you tell I am gloating a little, lol!
Also I found out someone else had tried to superglue the plastic parts together and then to the visor. Their whole steering column shorted out. So in addition to getting the part I did not not short out my steering column. Happy dance!!
Posted by noreen at 2:00 PM