We all went to a birthday party at a children's museum today and had so much fun. I will try and blog about that later. We were almost home when I suggested we stop and get the girls some ice cream. My darling husband laughed and said "I was just about to suggest that!" We do that all the time. I do that with other people too. When my DH cousin lived with us during the month of August I 'read' her mind usually at least once a day. She said is was weird but in a good way, she took it as I really knew her. Considering I had not seen her since Princess A's baby shower and before that only a handful of times, that is kind of cool. 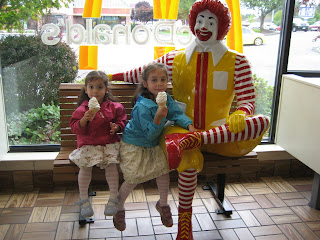 So can you guess where we stopped to get the ice cream cones? 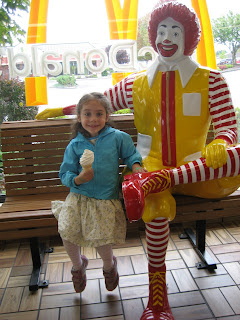 The girls would hoping to play on the play equipment but this one only had this. Princess A was not disappointed anymore when I told her I would take this picture. 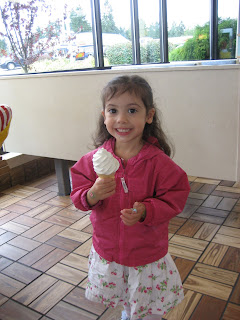 Princess G is all smiles with a whole cone to herself (Mommy and Daddy did get a few tastes.)
Posted by noreen at 10:21 PM