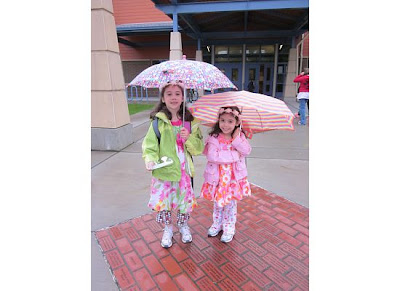 Yes, it was raining and only in the 50s!
Princess A and her sister, on the last day of school, both wore fancy dresses and ribbon flower garlands in their hair. Princess A was so sad that it was the last day of school. She made her teacher lots of gifts for the last day, Toffee, a paper sculpture, another friendship bracelet (her teacher told her the day before that she lost the one from a few weeks ago), a photograph of the two of them and a notebook with a cover she drew herself. 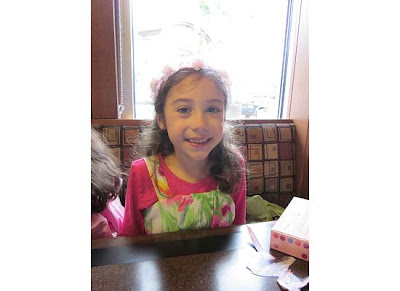 School was let out before lunch so I took them out to eat to celebrate. Princess A picked the Ram since she said she wanted a burger (her first plan was Pho at a Thai restaurant.) 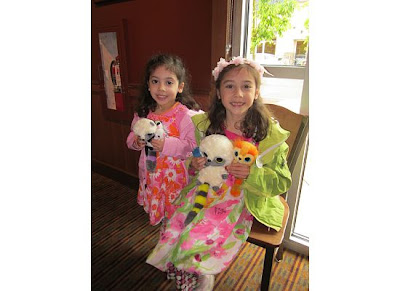 Last year Princess A was very sick and missed the end of school, to make her feel better we took them out to eat and Daddy let them pick a toy at Toys'R'us. Of course now they think one should get gifts for the end of school year. I did not want to disappoint them so here they are with their new YooHoo&Friends. Princess A also received Oreos (she asked for them), books and an embroidery kit. She has read all the books and finished her first embroidery project already. Well she finished the hula girl and now wants to add more embellishments. 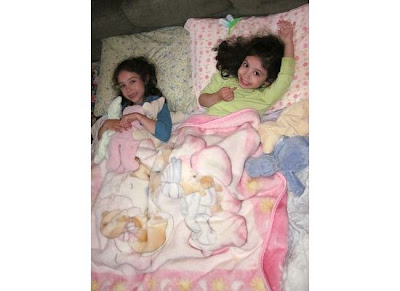 Last night I also told them that they could stay stay up as late as they wanted. They also wanted a slumber party on the landing. Finally after 10 o'clock they wandered into my room asking if they could sleep in their own beds. Princess G then climbed into my bed and said she was to tired to sleep alone in her room. I said she could stay if she fell asleep in ten minutes and surprisingly she did!
Posted by noreen at 11:02 PM