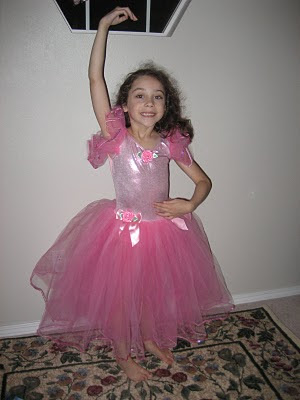 When this darling Pink Parfait Dress costume arrived Princess A was so excited. She kept asking "Is it really for me?" Princess G had her birthday last month so most packages have been for her. Princess A put the new costume on immediately and started twirling around the house. Princess A said that she felt like a real ballerina princess. I was very excited when I saw the quality of the costume. The girls have many dress-up clothes and costumes. Some were purchased just for playing and a few are previous Halloween costumes. We have a large variety and not all costumes will handle being worn or played with more than a few times. I know some people might purchase a kids costume and have it only worn once or twice but in our house dressing-up happens almost daily. Also our costumes have to last two little girls. I have a feeling this lovely Pink Parfait Dress is going to last a for quite a while, which is a good thing because Princess A has already worn it over a dozen times. Princess A has informed me that with some really warm leggings and thick pink sweater and coat she is going to wear this for her Halloween costume. Has your family started thinking about what they will be for Halloween? Princess G has been considering a princess or a ballerina like her sister. I can't believe that Halloween (and my birthday) is a little over two months away. Before we know it Fall will be in full swing and we will be out trick-or-treating!

This post was written for Family Review Network & Costume Supercenter who provided the complimentary product in exchange for my honest review.
Posted by noreen at 12:01 AM