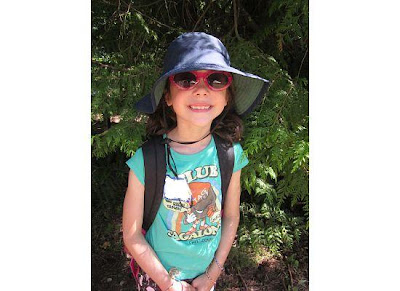 The girls and I spent a week at a Girl Scout Camp and stayed overnight on Thursday. Princess A wanted to wear her Girl Scout cookie shirt the first day and picked the camp name SuperStar. 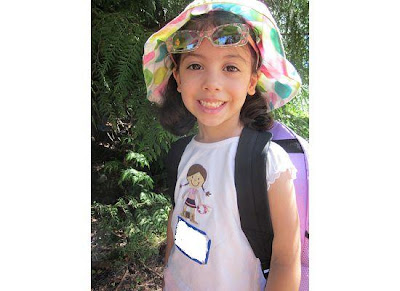 The theme of the camp was western so Princess G wore her cowgirl shirt the first day and picked Little Hippo as her camp name. My camp name was Smiles, I need a better name but it was the best I could do! 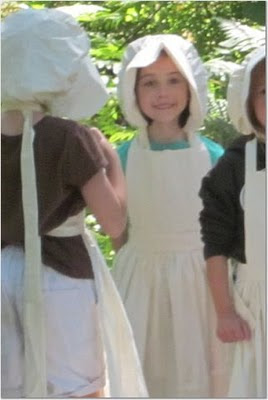 SuperStar's unit were know as the Purple Pioneers so on the first day they dressed up in their bonnets and aprons their unit leader made. I really wish I could of been in her unit they did the coolest stuff. 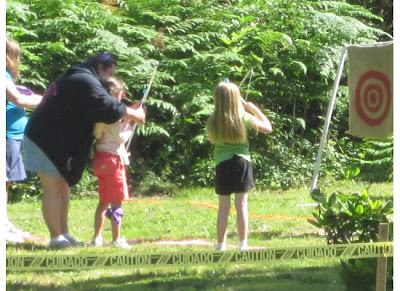 The camp was divided up into unit based on what type of troop you will be part of in the Fall. SuperStar was in a Brownie Unit (2nd and 3rd graders), Little Hippo was in the only Daisy unit (Kindergarten and 1st grade) and I found out a few weeks before camp that I would have a Junior unit (4th and 5th graders). Each unit had at least one session at archery. When it was my units turn i hit the bulls eye (I also lost one in the trees too!) 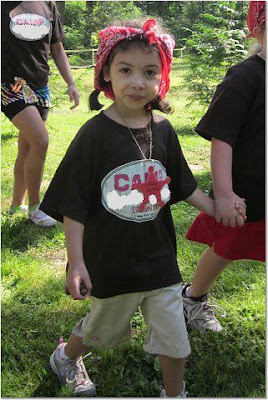 Since I had my own unit with 15 girls in it I only saw my girls mostly in passing. Each unit also had a color and wore a bandanna with their color at all time. Little Hippo, wearing her red bandanna, was on her way to decorating their hats. 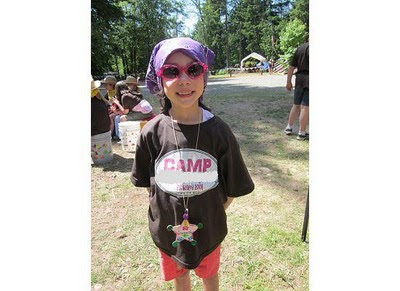 SuperStar's unit color was purple so later in the week they dyed their aprons and bonnets purple using red cabbage. Superstar loved using the cabbage and wants to try it at home some day but she did say it took a really long time. 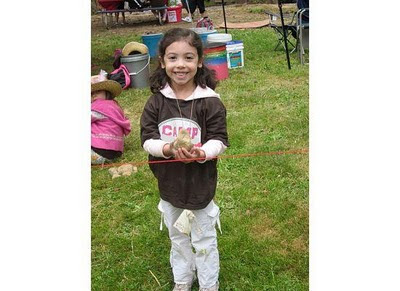 Little Hippos unit was close to mine so if they were not moving around camp I could stop by for a quick 'hello.' She did spend a lot of time digging up large rocks out of the dirt. When camp was finally over I had to wash her shoes twice in the washing machine. 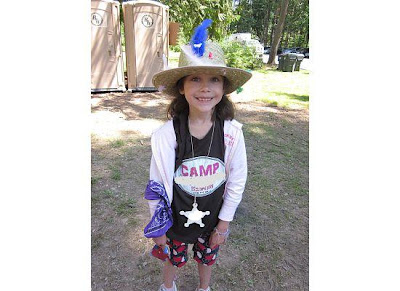 Our unit was also near the port-a-potties so I was able to see SuperStar quit often as well.
Here she is laughing because she had just cootied me. Cooties at camp at decorated clothes pins that you clip on people's clothing without then noticing. If they catch you then you get to give all of your cooties to them. The object is to not have and cooties and when you get them to give them away as soon as possible. 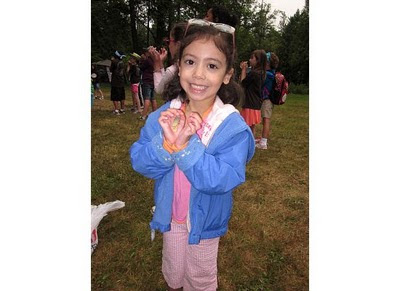 The beginning and end of camp each day was at the singing tree. The older Girl Scouts would lead songs and Little Hippo just loved the Jellyfish song and all of the silly motions that go with it. 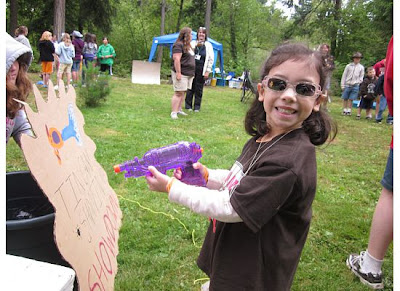 Thursday was field day and full of fun activities. Little Hippo had fun with the water gun. As a unit leader I had one and got into water battles with other unit leaders and some of the campers, it was so much fun. Here is SuperStar taking a little break after our lunch of hot dogs and watermelon. 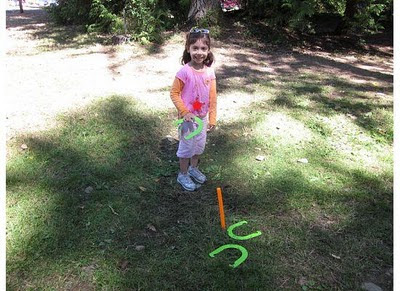 Another game on field day was horseshoes. 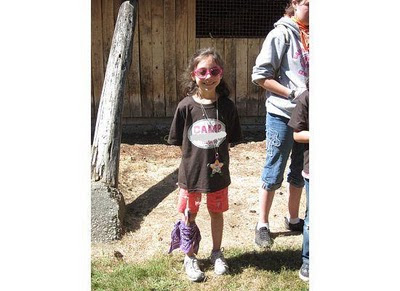 Also at the beginning and the end of each day was a flag ceremony. Each unit (besides the Daisy troop: The Rhinestone Riders) performed the flag ceremony once and SuperStar was the caller for her unit and she did great. 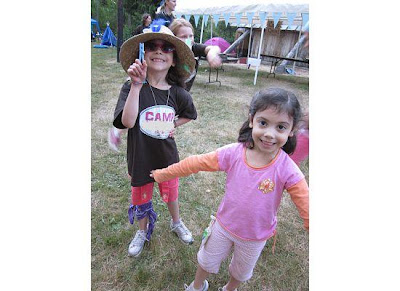 On Thursday we stayed the night and after dinner we learned square dancing. SuperStar is showing off one of the cooties right before the dancing started. 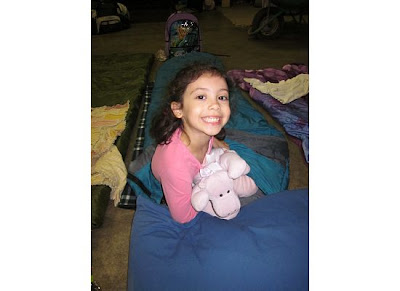 Everyone slept outside in tents except for the Daisy unit, they slept in the lodge.
I did not let the girls bring their special stuffed animals so Little Hippo picked Sparkles the hippo for camp. I was to sleep in a tent with my unit co-leader but both of her daughters joined her and with no room for my i joined Little Hippo inside. That sounds like a good idea but I was on a cot and Little Hippo joined me in my sleeping bag and she had a few night terrors. She does not normally have them but if she is really over tired she does and they did not go to bed until after 11pm so she was extremely tired. 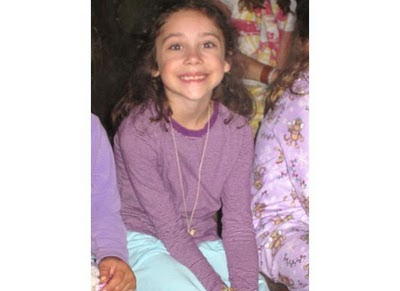 SuperStar slept with her unit in a giant tent and had a blast. She was a little nervous as it was her first time sleeping outside and without a parent but she did great. 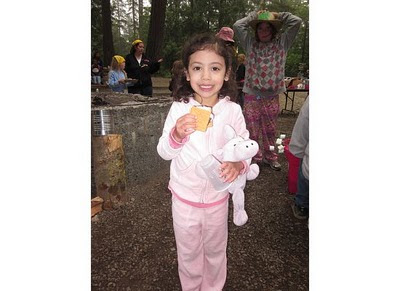 The camp was a little behind schedule the night before so after breakfast we did the smores. 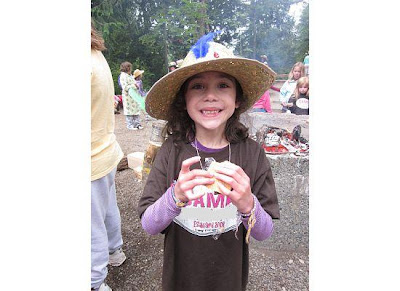 The original plan was for only the Brownie and Daisy units to do smores in the morning but everyone thought it was fun to do it after breakfast. 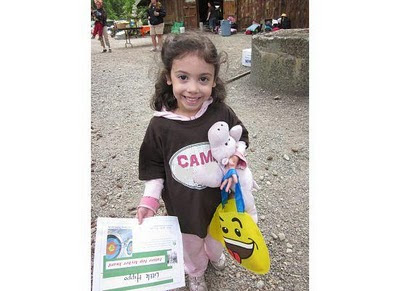 After packing everything up including the tents it was time for skits and awards. Little Hippo got an award for best smile for her unit and the only Daisy to get the Future Archer Award. 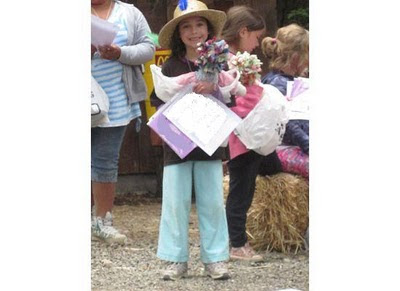 SuperStar did great on her skit and they was present with and award and her rag dolls she made at camp. She loves this doll and sleeps with her every night.
We had a great time at camp but by the end of the week I just wanted to get home, wash-up and sleep. The girls are already excited about next year, well except for the port-a-potties.
Posted by noreen at 9:09 PM