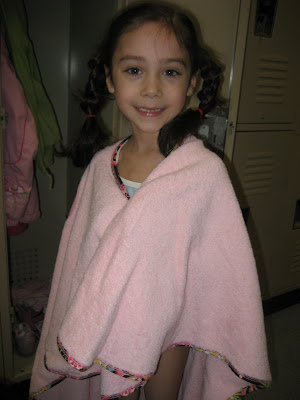 I saw the CozyCare Cape on a few blogs and thought it would be great for my daughter to wear for swim practice. The original purpose is for a mom to wear it while giving her baby or toddler a bath. The towel has an opening for the head so the mom or dad can place it around their neck and have the hands free to hold a wet squirmy baby. The cape has a water proof area in the middle of the cape to keep the parent dry. Besides keeping the parent dry, once bath time is over you use the cape as the baby's towel and dry them off. Instead of using it that way I thought Princess G could wear it into the pool area before swim practice. When we got to swim practice Princess A really wanted to try it and she loved it. (She loves it so much her sister has yet to have a chance to try it out.) I did put it on backward and inside out. That way most of the towel was on her back and the waterproof area was on the outside. She loved it! I forgot to take a picture but she also liked the the matching CozyCare Cap. It was great to soak up the water in her hair and believe me her hair soaks up a lot of water which then drips down her back and makes her clothes so wet. I folded her hair up on top of her head and put the cap on. Her hair was not as wet and the wet spot on the back of her dress was much smaller than usual. 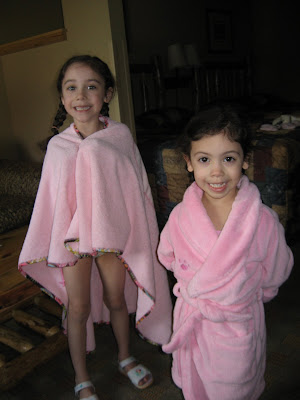 The CozyCare Cape worked so well that when we went to the Wolf Lodge for Princess A's birthday that is what she wore from our hotel room to the water slides area and back. Let me also say it was much easier to put on (just place her head through the opening) than the bathrobe Princess G wore. The robe was fine when she was dry but once she was wet it was hard to get her little arms in the sleeves. The CozyCare Cape would be great to keep mom or dad dry when washing baby and then to dry off your bundle of joy. The great thing is once your baby is not a baby you could use it like I did for a swim cover-up.
I also saw on Spa Time some very cool CozyCare Mats. One side is terry cloth and the other is darling designer fabric (the Chic design is my favorite). The best part is that there is a third layer in between that is waterproof. I could of used one of these the few times I was trying to clear up diaper rash and let the girls go diaper less. I bet it would also be great if you were trying elimination communication (diaper less all the time.)
Posted by noreen at 11:32 PM