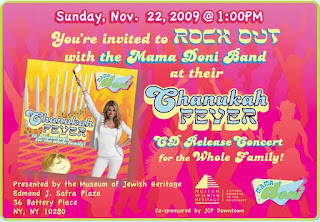 Chanukah Fever is a just fun and different. At first the girls were not what to make of this CD. The music made me think of disco but it is not disco. The music is funky, silly and fun! I just can't do it justice instead watch this video.


From the press release:


KIWI magazine called Doni Zasloff Thomas, “Part Weird Al’ Yankovic (for the hilarious and surprisingly insightful lyrics), part Sarah Silverman (but much cleaner and only the parts of Sarah’s show where she innocently sings her little heart out), and that adorable mom down the street who manages to wear bright red lipstick and cute track suit to put out the recycling at 6 a.m.”

Doni Zasloff Thomas, a.k.a. Mama Doni, is the lead singer/songwriter in The Mama Doni Band. Doni’s “wacky, Jewish indie-rock band for kids” (Carrie Stetler, The Star-Ledger) won the Simcha Award for “Inspiring Joy Through Music” in competition with more than 100 bands from 15 different countries at the 2008 International Jewish Music Festival in Amsterdam. Quirky, zany, off-beat, and unpredictable, The Mama Doni Band expands the horizons of traditional Jewish music with a contagious and unexpected blend of reggae, rock, disco, Latin, klezmer and “Jewgrass” – all woven together with a hip Jewish sensibility.

In a spirit of outrageous fun, Mama Doni brings her special brand of “funky music with a Jewish twist” to this year’s holiday season, with the release of a new CD, Chanukah Fever. The album is resplendent with Mama Doni’s signature wild and wacky style, about which kids’ media authority Amy Kraft enthused, “Listen as Mama Doni spreads around some challah-day spirit in her inimitable cross between Sheryl Crow and Tone Loc.”

Chanukah Fever will be released on November 24.
Posted by noreen at 12:29 AM