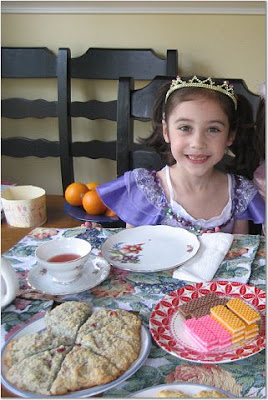 Princess A wants a real tea party for her birthday. To her that means real tea, fancy tea cups, tea pots, scones, sugar cubes, cookies and brownie hearts (I added the brownie hearts.)
Princess A has a good friend that she went to kindergarten with for two months (she moved to the afternoon class.) They each went to the other's birthday party but never to each other's homes. This year they are in the same first grade class. Her mother and I are always saying that we need to get the girls together after school but it never happens. I decided it was long enough and invited them over for a tea party. I thought it was time for them to come and it would be great practise for the tea party next month. The day before, I made brownie hearts (I used two petite heart pans I bought a few weeks ago) and two kinds of scones, apple and cranberry. (I have older heart pans that are almost the same that I use for making crayons since they had rust in them.) Did you notice the fancy tea cup? I found them at a thrift store and have enough for the party, our limit will be eight girls including the Princesses. Well I really have seven of those cups but I have another rose cup that is different but it will have to do. 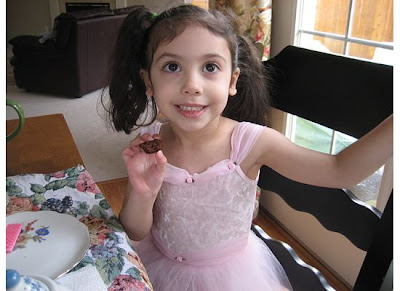 Princess G is holding one of the brownie hearts. I had made two dozen and they were gone so fast. I think for the party I better make at least four dozen, maybe six. Her plate is also a thrift store find. I was only able to find four so they will be used to display the treats and we will use paper heart plates (I got them on clearance at Target today). For the tea party I still need to find sugar tongs, some demi spoons (small spoons to stir the tea) and I would love to find some tea strainers like this one (the kind to put over the cup and pour through) so we could use loose tea. I am debating whether to buy these but I don't really want to buy eight of them, what would I do with them after the party? Maybe I will just get a few and the girls can share or maybe I can find some locally and not have to pay shipping.
I am trying so hard to resist as I do have a budget for the party.
The tea party with Princess A's friend was a success so I hope that bodes well for the party next month.
I just realized I was suppose to do the invitations today so I could hand them out while I am helping at school tomorrow!!
Posted by noreen at 8:49 PM