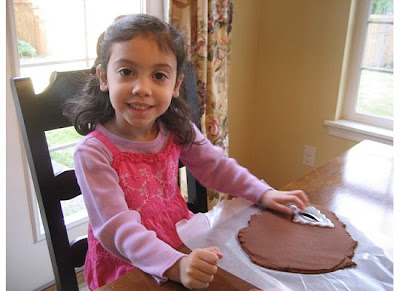 Last Christmas I came across a recipe for cinnamon-applesauce ornament. It was too late to make them but I vowed to make them this year. The recipe I found called for equal parts of cinnamon and applesauce. The dough was much too sticky. I found some more recipes, some of which called for a little white glue (like elmer's). I did not have enough cinnamon in the house so the next day we went and picked up some more (Winco sells cinnamon in bulk making it much cheaper). I added lots of cinnamon and about 2 tablespoons of white glue. 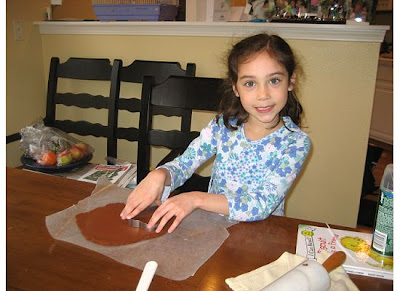 WhenI first rolled the dough out I did it between wax paper and they really stuck to the paper. I finally figured out the best way was to roll it quickly on the wax paper. Once thin enough, quickly use the cookie cutter and lift off the wax paper using my offset spatula. We baked the ornaments for two hours at 200 degrees. I flipped the ornaments about every forty minutes. I then left them out to dry. The whole house smells like cinnamon. I thought was a good think until I discovered that strong cinnamon smells cause horrible headaches for me. The ornaments are fun to make but we will only do this again on a day warm enough to be able to open all the windows in the house!
Posted by noreen at 6:24 PM