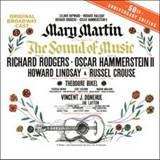 Is there anyone who does not know the
music of the Sound of Music? I only know the story from the wonderful movie starring Julie Andrews. Before the movie it was a hit on Broadway. Now on the fiftieth anniversary of the of the Broadway show a new CD has been released:
THE 50TH Anniversary Special Edition The Sound of Music with songs by Rodgers & Hammerstein original Broadway cast recording, plus three rare bonus tracks, new liner notes and candid photos of recording sessions and new insights to celebrate. I was a download of the album to enjoy. I have always loved the music of the Sound of Music. I remember watching the movie so many times. I also sang the songs with my sisters for fun, Do-Re-Mi was always a favorite of ours. I also remember sing some of the songs in music class while in elementary school. Princess A was taught Do-Re-Mi herself earlier this year at school. All of these songs are such classics. I have been enjoying the songs and the memories they invoke for the last few weeks. 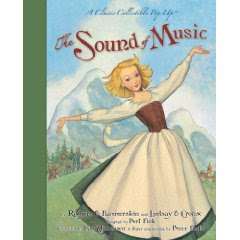 I was also given an opportunity to view the new The Sound of Music Pop-Up Book.
The book is just a marvel to behold and the perfect introduction to the Sound of Music to small children. The Nazis are not mentioned in the book which I know was a main point of the real story. To me though I am glad I do not need to explain the Nazis to my daughter just yet. At six years old Princess A likes to ask lot of question which I try to answer. Nazis is something I don't want her to know about for a while longer. The story and pictures are lovely and just right for children. My girls think the book is cool and fun to read (or just look at) over and over. I remember so many different pop-up books when I was a kid but I don't see as many around anymore. This pop-up book is great and with the music on the newly released 50th Anniversary Special Edition The Sound of Music a wonderful gift for a long time fan or to introduce The Sound of Music to a new generation.

I was send a download of the CD and a copy of the book to facilitate a review. I was not compensated in any other way. The opinions stated are my own and may not reflect others' views.
Posted by noreen at 2:50 PM