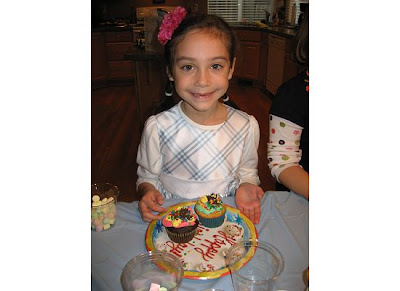 A school friend of Princess A, who has the same name, had a very fun birthday party. First they played bingo a few times. Then the real fun started, decorating cupcakes. Each little girls was able to decorate two cupcakes. They had frosting (in decorating bags), sprinkles, marshmallows, colored sugar and mini chips to decorate with. After that they sung karaoke until it was time to go home. Again most of the songs were Hannah Montana which Princess A (or me) don't know at all. We were the only ones who did not know the songs as all the moms were singing along and some of the dads.
Princess A has been wanting a tea party for her next birthday but now she is wavering between the cupcake decorating and a tea party.
Posted by noreen at 10:49 PM