Making a Kite, a Tutorial

Last night the girls were watching Dragon Tales and in the show the characters made a kite. The girls decided to make one too. They grabbed some computer paper, two dowels, a long thin ribbon and three wide short ribbons (for the tail) to make the kite. They started laying out about ten pieces of paper in the shape of a diamond. As I was watching them I notice a pile of tissue paper (still not sure why that was out) and thought it would be better for making the kite.

Here are the girls flying the kite once we were done. 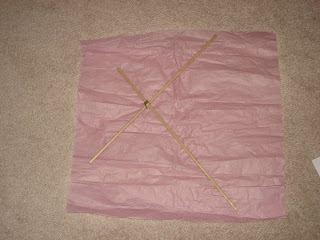 In case you want to make one here is how we did it. I used a rubber band to hold the two dowels together, I just wrapped it around a few times until it held the dowels tight. We then laid the two dowels down over two sheets of tissue paper. 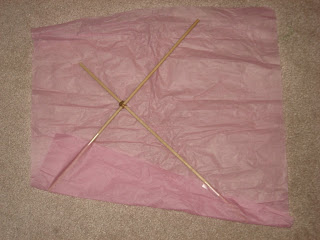 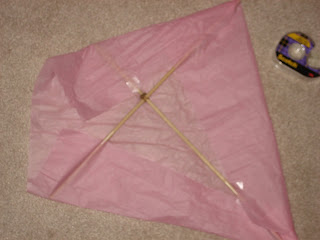 I continued around the kite until it all four sides were folded and taped. We then tied the short ribbon where the dowels are connected for the string. The other three ribbons were tied together and then taped to the end of the kite for the tale. The whole thing took less than five minutes, probably only three.

I never made a kite before but vaguely remember reading how to do this as a kid. Since we made it out of tissue paper it really is not for actual flying. I think we will try this again when the weather is better, maybe with some plastic bags or some other material and try and make a kite that will really fly.