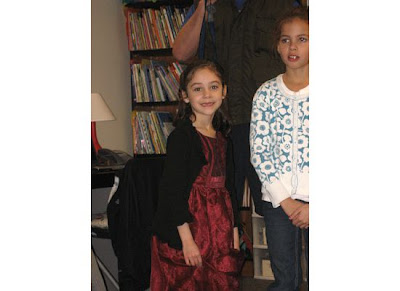 Wednesday Princess A did a presentation at school. She wanted to wear her fancy flower girls dress for her poem. She was last because the presentation started just when Princess G gets out of school. I had asked her teacher to put her last in case I was late. I ended up picking Princess G up from school 20 minutes early so we had plenty of time, and in fact we got seats in the front row. 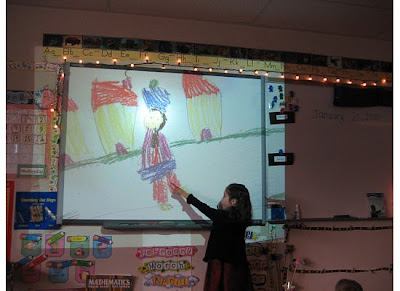 Finally it was Princess A turn. She introduced herself and then explained her drawing which was inspired by the poem. 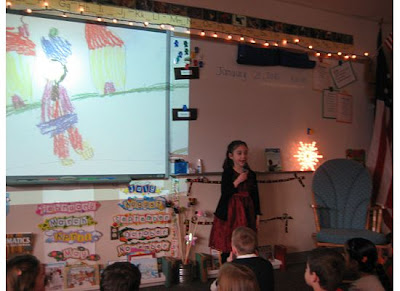 Then she recited her poem:

Princess A did great, she made eye contact with audience, did not talk too fast and used a nice clear voice. 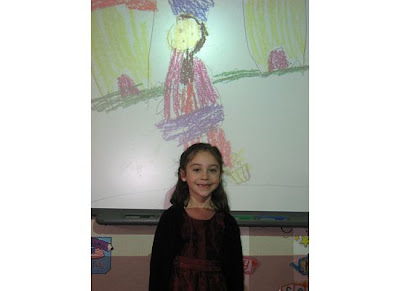 After everyone was done we got to stay and visit for a few minutes. I took another picture of her in front of her drawing of slipping on ice while drinking soup. 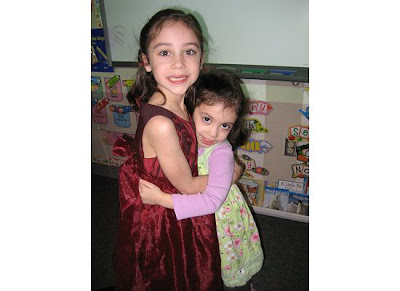 Princess G had to give her sister a big hug. Princess G did well waiting for all of the poems. We were in the front so she started waving to all of the other students while wait for Princess A. 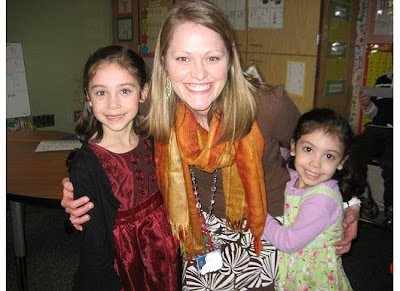 Princess A has a student teacher in her class and starting Monday she will be teaching the class for six weeks. Princess A had been worried about the change though it took a while to figure out what was upsetting her. Ever since school started again, after Christmas break, Princess A has been complaining she felt nauseous after school. It was not everyday at first but seemed to become a more regular occurrence the last week or so. I could not figure out what was the problem. I kept asking her what was wrong or if she was worried about something. She kept saying nothing was wrong. I got more subtle with her and started discussing it more with her teacher too. 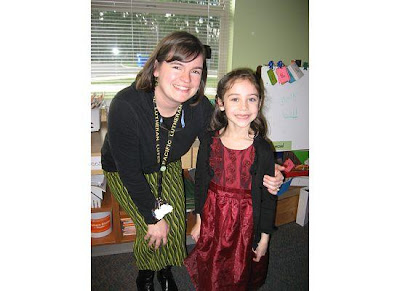 Here is Princess A' teacher, she just loves her. I think Princess A was most upset that she would not get to see her all day. Princess A loves her teacher and likes knowing what is going to happen. Together with her teacher we thought that the changes in class might be what was upsetting her. Her teacher talked with the whole class yesterday about the changes and how everything would work. It did the trick. Princess A happily announced yesterday, when I picked up from school, "I don't feel nauseous at all!" Hopefully the next six weeks will go well.