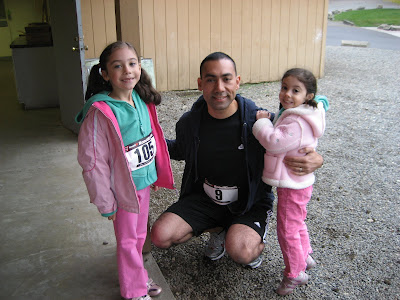 Daddy woke us all up early this morning so we wouldn't be late for Princess A's second race ever. After picking up and pinning on the numbers they started stretching. 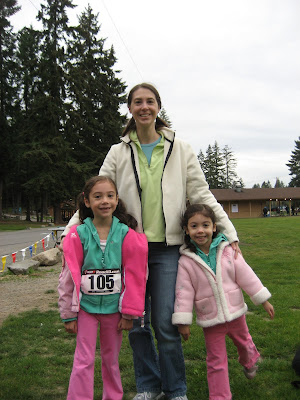 Princess G and I were the cheering section. We cheered all of the runners especially our two favorite runners Princess A and Daddy. 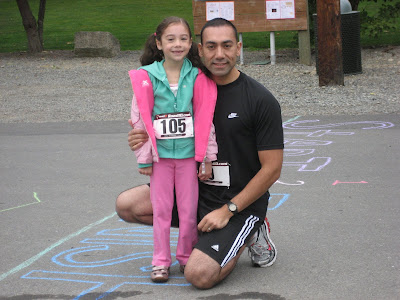 Here are my two runners at the starting line. Princess A was so excited and could barely wait for the race to begin. 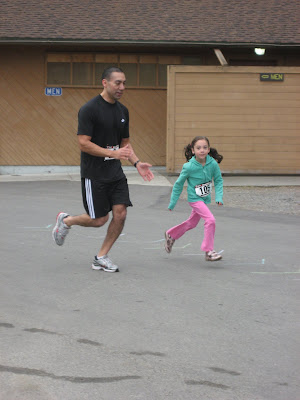 The path was a quarter of a mile so for the race, one mile, they did four loops. Just as they were finishing the third loop Princess A started to slow down and walk. She then noticed a lady behind her that they had passed by once already. She was not going to let anyone pass her so she started running again. Princess A and Daddy held hands most of the race but toward the finish line she let go of his hand and dashed ahead. 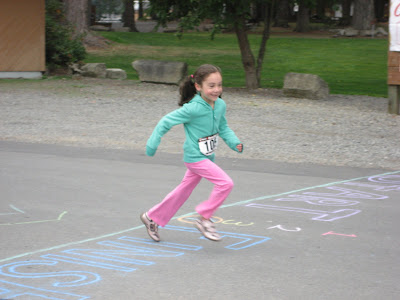 Her official time was 11:08 for one mile.
She improved her time by 8 seconds from her first race.
She was also very proud that she beat Daddy by one whole second as his time was 11:09.
She was also the third person to cross the finish line!! 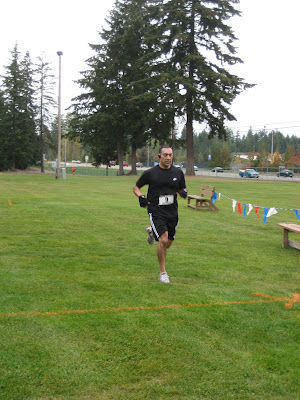 Daddy was also signed-up for the 5K, which started about five minutes after the one mile race so as soon as Princess A and Daddy finished he ran over to join his race a little late. The race was a little convoluted and since he was running behind the other racers he got a little turned around and ended up running 3.8 miles (the 5K is about 3.2 miles). So with the one mile race he ran and the extra distance Daddy ran almost five miles. 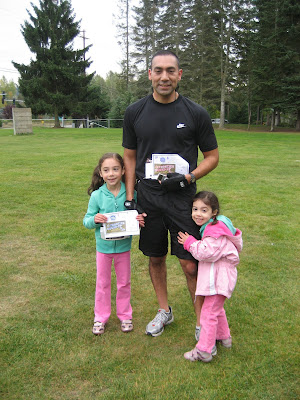 After you finish your race you can fill out your own certificate. Princess A made one for herself and Daddy for the one mile race. We waited at Daddy's second finish line so we could give him the certificate as soon as he was done. 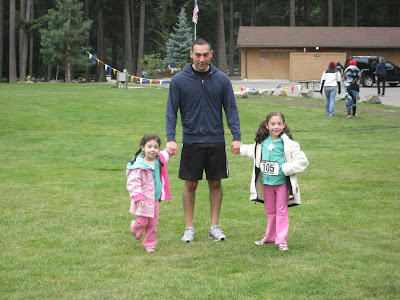 After the race they had a few drawings for shoes and RoadID and Daddy won a water bottle. Princess A was really wanted to win something but other names kept being called. Just as it ending I heard the organizers whispering and then they presented Princess A with a water bottle. She was a little confused as they did not call her name but I told her they had called Daddy's and knew that she had the same last name so they did not bother trying to say our last name again. (They did mispronounce it when Daddy won.) She was so excited to win but a little suspicious of my explanation. One of the runners also gave us a certificate to RoadID she had won saying she would never use it. It looks cool but everything on the site was more than the certifcate so I don't know if we will use it. My husband is the runner so I think he might find out more about them before deciding if he will get a RoadID. 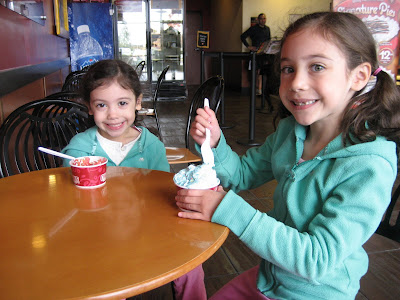 The girls wanted to go straight to Baskin Robbins for a giant ice cream sundae, but it was still to0 early for the store to be open, I know because we drove by. We ran a couple of errands and the girls decided they were hungry for lunch. We all went out for Pho and then Cold Stone for ice cream (it was closer). The girls each got their own, Cotton candy with rainbow sprinkles and watermelon sorbet with Rainbow sprinkles. Daddy and I shared a Berry, Berry Good. It was a great day of races and tomorrow is another race just for Daddy. We are going to cheer him on!
Posted by noreen at 11:42 PM