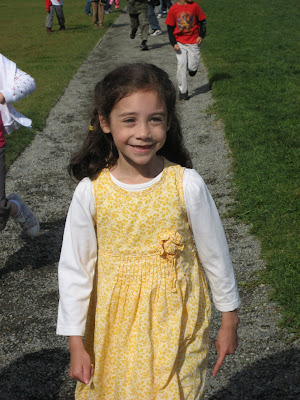 On Friday Princess A's school had a walk-a-thon, the only fundraiser for the school year. Last year they did the normal fundraising where the kids sell overpriced items that are not the best quality. The fundraiser last year did not raise much money. The school sent a letter home stating the fundraising did not go well and asked if parents could just make a donation to the school. I am so glad they did the walk-a-thon this year. I would much rather give my money straight to the school instead of buying over priced items and only part of the money goes to the school. Friday was off and on rain all day so we weren't sure it was on until the last minute. Right before the walk-a-thon was to begin the sun came out! Princess G and I showed up a little early so we could help and cheer her sister on. 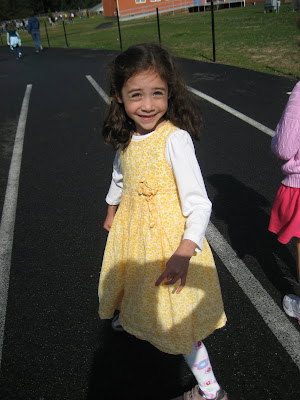 The walk-a-thon was suppose to last half an hour but Princess A was in the last group to make the loop so she walked for about forty-five minutes. I walked the first loop with her and Princess G. When Princess G wanted to be carried instead of walking herself I started taking shortcuts to cheer Princess A on at strategic locations. After the walking was done everyone got an otter pop. 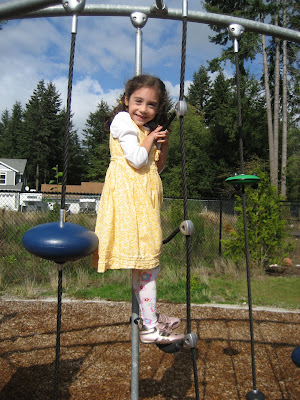 Just as everything was wrapping up it was time for Princess A's recess and she asked us to stay. She wanted to show us the hopscotch squares, jump rope and the playground. 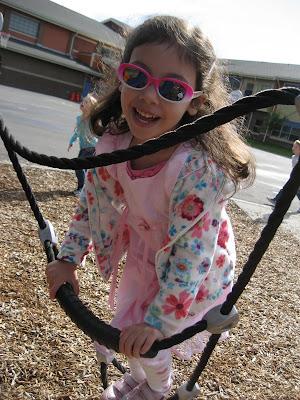 Princess A had lots of fun showing Princess G around. Many of the kids that had been in Princess A's kindergarten class remember Princess G and wanted her to play with them. By the time recess was over and I had signed out it was only thirty-five minutes until school was over. I thought about just staying out in the parking lot (some parents were already lined up) but we went home instead. I just couldn't sit for that long when our home is five minutes away.
Posted by noreen at 11:00 PM