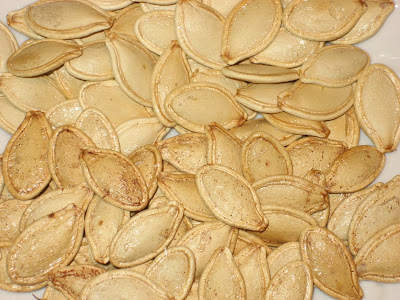 As soon as we finished the carving the girls' pumpkins I got to work cleaning off the seeds. I rinsed and let all of the seed air dry a whole day (over night was enough but Mondays are crazy here.) This time I decided to get a little creative so I made two version. For both I tossed the seeds with a little canola oil. For half of the seeds I also added some cinnamon with the oil. I spread the seed on cookie sheets and sprinkled with sea salt. I roasted the pumpkin seeds at 350 F for about 15 minutes. Once they were golden brown I pulled them out. As soon as they were cool enough the girls started to devour them. We already finished the cinnamon and are almost done with the plain ones.
Posted by noreen at 9:43 PM