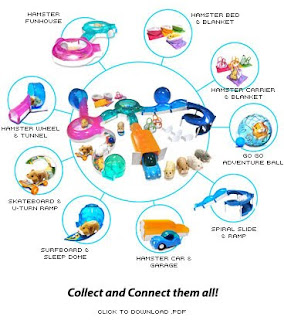 The princesses had some friends over play with the new ZhuZhu Pet Hamsters. They were a huge hit. Before their friends arrived I opened and set up the ZhuZhu Pet habitat. It is so cool. I let each of the princesses pick out two ZhuZhu Pets for themselves (we put two of them away for the party) and each of the guest picked out one. The kids loved watching the ZhuZhu Pets go all around the habitat. The kids happily played with the hamsters the whole time. Only a few paused to grab some snacks. At the end of the party we had some races. All of the kids got to pick part of the habitat to take home. The winner of the ZhuZhu race got first pick, second: second pick and so on. All of the kids were so excited to take a ZhuZhu Pet and one of the habitat accessories. After the party we still had two extra ZhuZhu Pets so I set them to my niece and nephew. My sister told me they knew exactly what they were and said they had been wanting them. They loved them so much they took them to Disneyland. My sister says they take them everywhere. 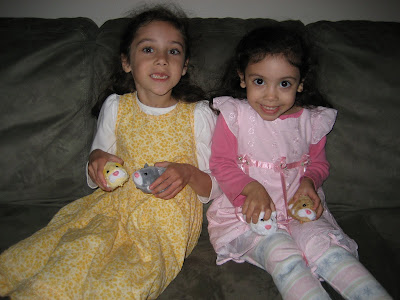 I completely forgot to take pictures during the party. Here are the girls after everyone left. 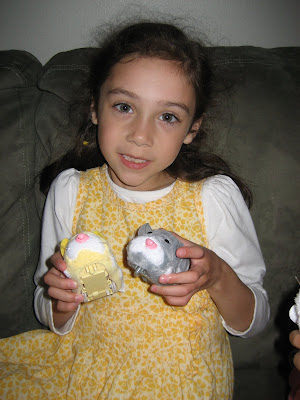 Princess A loves racing her two ZhuZhu Pets. She also likes to turn them on while siting on the couch and seeing if she can grab them before they fall off. 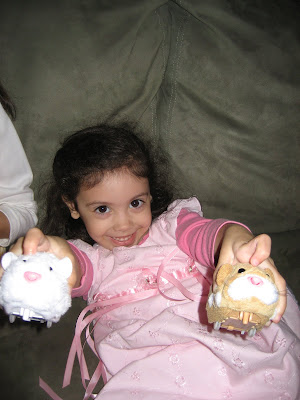 Princess G likes to snuggle with them and dance around them as they explore all over the living room and kitchen. I love the cute noises they make and the fact that they are not real (no cages to clean!) The ZhuZhu Pets are so cute and close enough to hamsters for little kids that it is as if you have the best part of having a bed with none of the drawbacks.
Posted by noreen at 2:20 PM