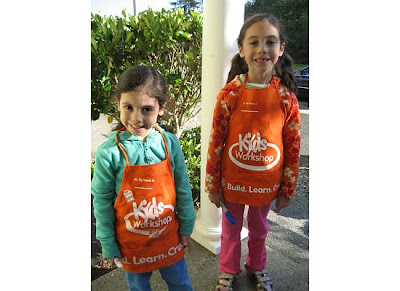 First the girls put on aprons to keep their clothes clean. Just like last year they picked out their Home Depot Kid's Workshop aprons since they are orange just like the pumpkins. I should of been the one with the apron since I had the fun job of scrapping out the pumpkins again. The girls did not even want to touch the insides this year but they wanted to make sure I was saving the seeds. I just tossed everything in a bag so I could pick out the seeds later. 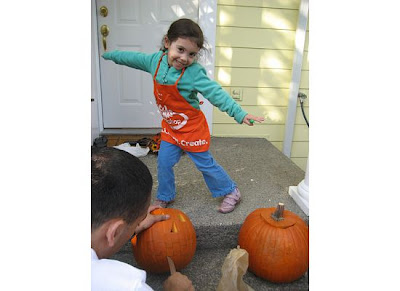 Princess G drew the eyes and mouth on and asked Daddy to draw the mouth. Princess G kept Daddy entertained with fancy poses while Daddy carved. 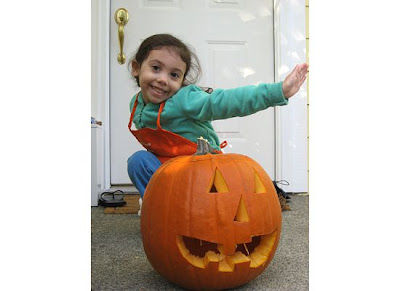 Beautiful princess and her pumpkin! 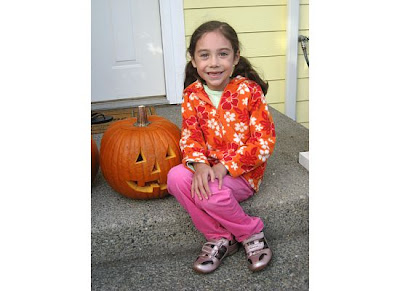 Princess A drew a face on the pumpkin but she did not like it at all. She was a little sad that she did not 'get the drawing right' but we showed her that we could decorate both sides. She had Daddy draw and then carve the pumpkin. She then got so excited and wanted to carve both sides of the pumpkin. We convinced her that if we are using a candle on Halloween night one side carved would be the best (plus it was so cold Daddy just wanted to get inside.) 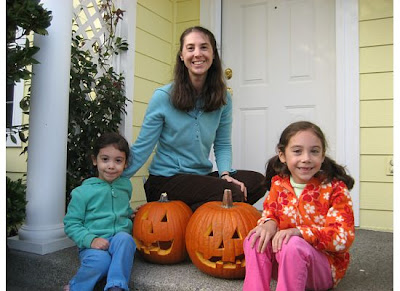 I think both of the pumpkins turned out beautifully.
I just hope they last until Halloween since we did carve them last Sunday.
Posted by noreen at 12:01 PM