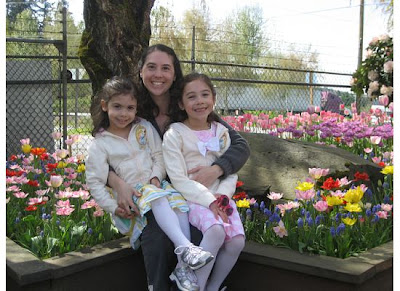 I hope everyone had a wonderful Mother's Day!
My sweet husband had lots of plans for a fun day for me: breakfast out, visit the Farmer's Market (1st time this year) and dinner at Anthony's (our favorite restaurant where we used to live). Instead we had a low key day at home because Princess G was very ill. It started on Saturday, she complained that her eyes 'need more water' (they were dry) and I noticed more gunk in her eye than normal, but just a little extra. Thirty minutes later it was looking a little red and it was draining a lot of stuff. The gunk was normal color just a lot of it. I called the advice nurse and by the time I talked to someone (25 minutes later) it was slightly green. We went straight to the Doctor's and within another 30 minutes it was bright green and just coming out constantly. She has an earache and pink eye! The antibiotic took a while to kick in and meanwhile her poor eye swelled almost shut. She was a trooper and did not touch her eye. The Doctor said she could go to school today but her voice is yucky and her eye looks bruised (the pink eye is cleared up but the lid and under her eye are a little discolored.) My poor baby! It is so hard when they get sick. Luckily this is our only second prescription for antibiotics and Princess A has actually never had them. Only Princess G has had antibiotics and last time was for an earache. She also threw-up early Sunday morning from the medicine. She had a snack when she took it (around 2:30 am) but it must of not been enough because a little our an hour later she threw-up all over her bed and poor hippo. She calmly called out to me 'Mommy, I need you" and waited at the end of her bed. She did not get any on herself so Daddy and I cleaned up her bed while she climbed into ours and fell right asleep. I really did have a nice Mother's Day despite what it sounds like. Instead of going out my sweet husband went and picked food up as he said I should not have to cook even if we can't go out. We just stayed home, watched movies together, I finished knitting a starfish for Princess G, we played games and just hung out together.
Posted by noreen at 9:58 AM