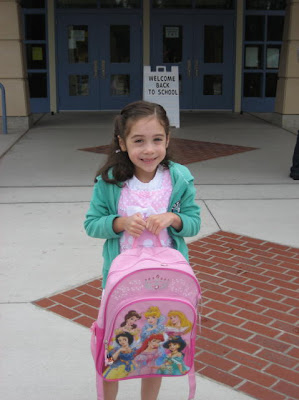 My baby is in first grade!
She is using the same backpack from last year. She told me she would need a new backpack because she thought she might be too big for this backpack. She was so relieved when I convinced her that she could still use her Disney Princess backpack. She did have a new lunch bag. Princess G received two for her birthday and was nice enough to give one to her sister, a Tinkerbell lunch bag. For lunch I made her banana-peanut butter sandwich, pretzels, kettle corn (she said it made her fingers too sticky so she did not eat more than one) raspberries, blueberries, water, Hershey's Kiss and a love note from me!
I made the girls chocolate chip pancakes for breakfast which was bribery to get them moving faster, I told them I would make them if we had time in the morning. 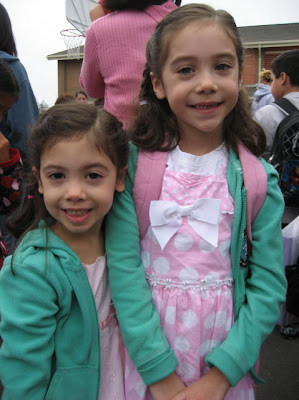 Princess A was a little worried about the bathroom (she has only used the bathroom located in the Kindergarten classroom) so we went a little early so I could show her. We then went to the back and found her line. After a few pictures I could tell she was getting nervous again. I kissed her hand about thirty or forty times (until she started to giggle) and told her that when ever she was worried or missed me she could rub one of the kisses over her heart. That did the trick. I did the same thing the next morning and after school both days she has told me that she did not need them but they still made their way to her heart.