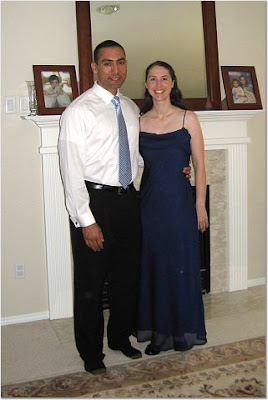 A co-worker of my husband's got married and we were invited to the wedding. The wedding was at night in Seattle. I have not really dressed up in years, not since my sister's wedding when I was pregnant with Princess A. I went the whole nine yards. I found this beautiful dress. I was hoping for something a little shorter but this turned out beautifully. I had a hard time finding a dress and ended up with a dress from the teenage section. It just fit me better. I also had to buy high heels. I have not worn high heels in years. The last time was my sister's wedding and a job interview back in 2005. I must say I was pleasantly surprised the shoes felt good and my feet didn't hurt. I also put on make-up. I wear lip gloss on occasion but that night I used eyeshadow! 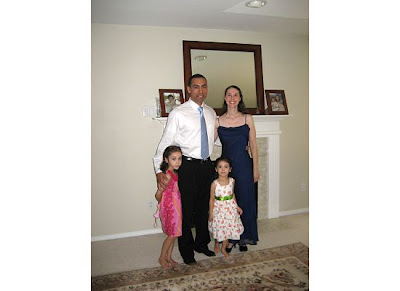 Aunt Cathy came to watch the girls. It made it so much nicer since I did not have to worry about the girls. It was the first time anyone else have ever put them to bed. We usually do early evening dates so we are home before their bedtime. The girls stayed up way past their bedtimes (almost two hours) but they had fun and so did we. 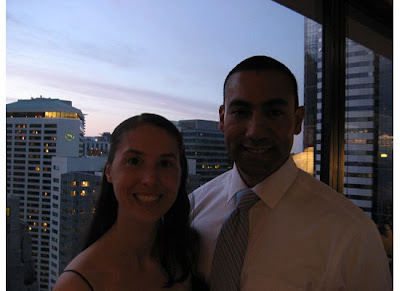 The wedding was at the Seattle Hilton and the reception was at the Top of the Hilton. We did end up waiting almost two hours for dinner to be served. They were taking pictures and we were given hor'dourves, three or four little ones. The food, when we finally was served, was delicious. I went back for seconds, I especially adored the salmon and the potatoes. Later after the cake the dancing started. Only a few people danced (the DJ was horrible, who plays the two step and horrible 80s music together). I was out on the dance floor most of the evening. The music was alright in the beginning but it became progressively worse so by the time the two step music came on we left. Now I like some two step music but believe me this was bad two step music. Everyone left the dance floor and he played another one! I had a wonderful time but mostly I enjoyed a night alone with my darling husband.
Posted by noreen at 2:20 PM